By now most residents of the Kalamazoo area heard about the wild arrest that was made earlier this week, however, more keeps developing in this crazy holiday case.

Earlier this week, we broke a story about Wiggle The Elf, who got busted for speeding. More has developed in the case as we found out that after the police released Wiggle he was returned to the rightful owners who made sure he stayed out of trouble. Below is a picture of Wiggle while he was being held temporarily:

The Mother of two, Jennifer Hinga, who looks after Wiggle had this to say on her facebook:

Told the kids today that I really hoped their elf had enough time to fly back to the North Pole at night since they weren’t going to bed on time....looks like he didn’t...busted for speeding. Thankfully a friendly neighborhood officer recognized him and after booking, was able to return him home to us. She felt okay with this since we had just built a jail out of blocks today. Hope all involved parties learn their lesson. Speeding gets you on the naughty list, and so does not going to bed on time.

Looks like a pretty open- closed case here. I doubt Wiggle will be having any more run-ins with the law. Officer Kendall really saved the day and is the true hero of this story.

The holiday season is always filled with stories of charity and positivity. After all, that's what the holiday spirit and season is all about. What's most shocking is when someone who seems to be good-hearted commits a crime that's completely out of their character.

It seems that's what happened yesterday when the Kalamazoo Department of Public Safety got a call and complaint of someone who was seen speeding north at dangerous speeds. With road conditions being what they are, there is no way the police could condone such careless and reckless behavior. Luckily Officer Kendall was diligent enough to track down, find and arrest the culprit:

Wiggle The Elf. Who knew that this seemingly kind elf could commit such a heinous and dangerous stunt?  He was later taken downtown for questioning and a mugshot: 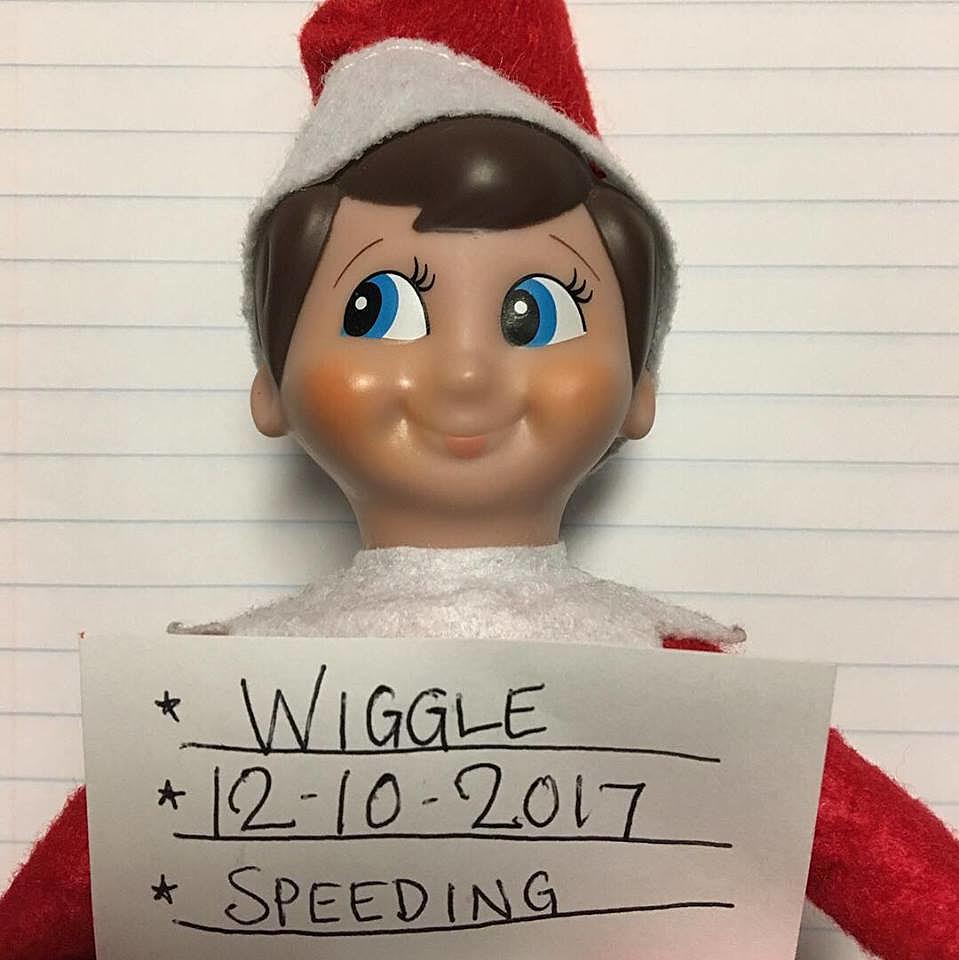 After being questioned as to the reason behind his crime it was revealed he was on his way back to the North Pole to help Santa in time for Christmas. The reason for speeding was no excuse, however, there were no signs of substance abuse so the local police understood and released him with no further charges or bail needed.

Let this be a lesson that if you're caught recklessly driving in Kalamazoo unless you're on your way to the North Pole, you won't be getting off so easy. Stay safe out there this winter season and you won't end up in cuffs like Wiggle.

MICHIGAN GIRL DOES SOMETHING AMAZING TO GET A SNOW DAY
Categories: Articles, Local News
Comments
Leave A Comment
Marshall’s Merry Mile Brightens The Season
Jason Aldean Snoozes With Baby Memphis in Cute Photo
Old Dominion Decorate Their Tour Bus For Christmas
Michigan Is the Only State to See a Completely White Christmas in 2017
Watch Kelsea Ballerini Duet With Trisha Yearwood in Nashville
Trisha Yearwood Shares What She’s Getting Garth Brooks for Christmas
Luke Bryan Visiting Hospital Patients Is What the Holidays Are Truly About [Watch]
Hear a Clip of Sugarland’s Comeback Single, ‘Still the Same’
Hear Sam Hunt’s Haunting ‘This Land Is Your Land’ From ‘Bright’ Soundtrack